The Gaelic Football Rule Changes which become operative on 1 January 2014 are as follows:
1. Introduction of a Black Card for Cynical Behaviour Fouls.
2. Change in the number of substitutes allowed.
3. Distinction between Deliberate and Accidental Fouls.
4. Definition of the Tackle.
5. Introduction of a clearer Advantage Rule.
6. A player in possession may score a point with an open-handed hand-pass.
Cynical Behaviour Fouls
1. Deliberately pull down an opponent.
2. Deliberately trip an opponent with the hand(s), arm, leg or foot.
3. Deliberately body collide with an opponent after he has played the ball away or for the purpose of taking him out of a movement of play.
4. Threaten or to use abusive or provocative language or gestures to an opponent or a teammate.
5. Remonstrate in an aggressive manner with a Match Official.
The penalty for the above fouls are:
i. Free Kick from where the foul occurred.
ii. Order Off offender by showing him a Black Card*.
iii. Allow a replacement from within the substitutions permitted*.
*Substitutes
• Increased to SIX per team.
• Maximum of THREE permitted for Black Card Offenders. 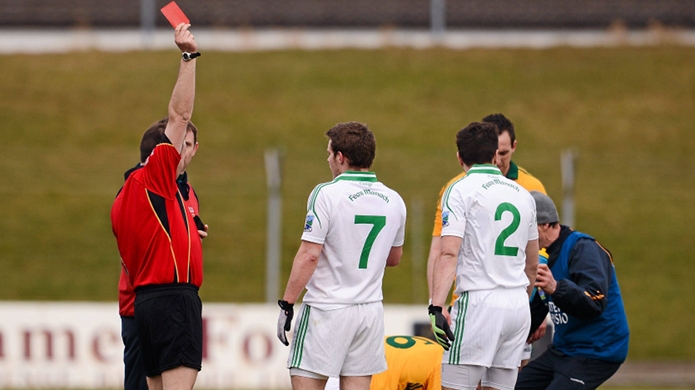 Immediate Ordering Off Infractions (Red Cards)
1. Striking or attempting to strike with arm, elbow, hand, knee or head.
2. Kicking or attempting to kick with minimal force or with force or causing injury.
3. Behaving in any way which is dangerous to an opponent.
4. Spitting at an opponent.
5. Contributing to a melee.
6. Stamping.
7. Inflicting injury recklessly.
8. Abusive language towards a Referee, Umpire, Linesman or Sideline Official.
These are unchanged. 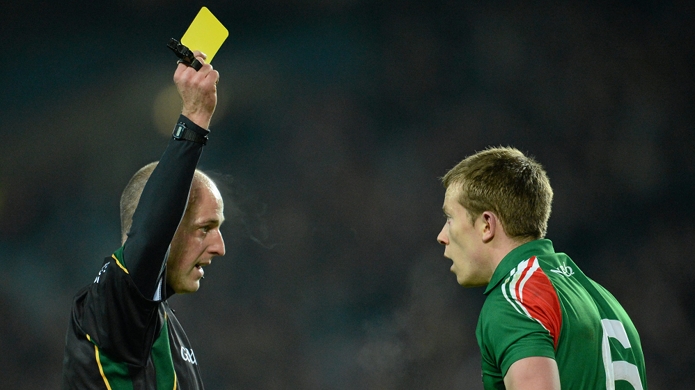 Cautionable Infractions (Yellow Cards)
1. To block or attempt to block with the boot when an opponent is kicking the ball from the hand(s).
2. To prevent or attempt to prevent an opponent from lifting or kicking the ball off the ground by striking an opponent’s hand, arm, foot or leg with the boot.
3. To engage in any other form of rough play.
4. To attempt to achieve an advantage by feigning a foul or injury.
The above are all currently existing Yellow Card Infractions. 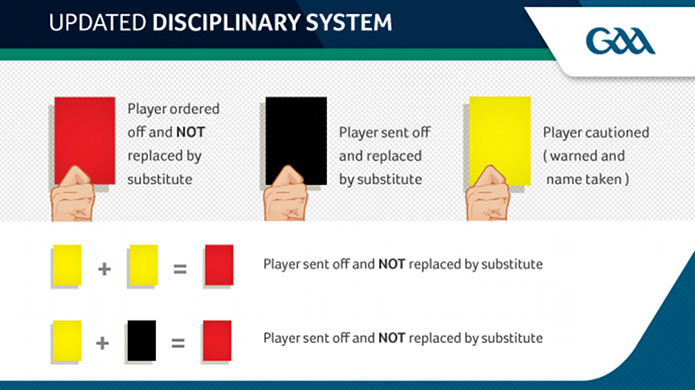 The Tackle
The Tackle is re-defined as:
“The Tackle is a skill by which a player may dispossess an opponent or frustrate his objective within the Rules of Fair Play. The tackle is aimed at the ball, not the player. The tackler may use his body to confront the opponent but deliberate bodily contact (such as punching, slapping, arm holding, pushing, tripping, jersey pulling or a full frontal charge) is forbidden. The only deliberate physical contact can be a Fair Charge i.e. Shoulder-to-shoulder with at least one foot on the ground. More than one player can tackle the player in possession.”
Advantage
Advantage Rule is defined as:
“When a foul is committed the referee may allow the play to continue if he considers it to be to the advantage of the offended team. He shall signal that advantage by raising an arm upright. If he deems no advantage to have occurred, he may subsequently award a free for that foul from where it occurred*. The referee shall allow the advantage to run by maintaining his arm in the upright position for up to five seconds after the initial foul or for less time if it becomes clear that no advantage has accrued. He shall apply any relevant disciplinary action.”
Point with Open Hand
A player in possession may score a Point with the open hand or fist. 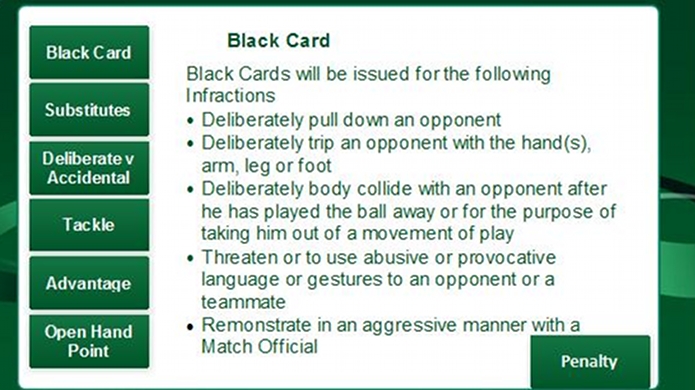