The first reference to camogie in the parish was to a team founded in Ardlow in the late 1920’s. Camogie was seen as an involvement for the women who had supported local footballers in the GAA. Nora Quinn (formerly Gillick) relates the funding of the first night. A dance was held in the big granary in Quilca House on St Patrick’s Night, 1929. Permission was sought from Fr. McCauley, CC, to run the dance. He held great influence over the holding of social activities in the parish at that time. Permission was also granted by P.Farrelly, Cornasesk, the then proprietor of Quilca House. The rafters were decorated with green and gold crepe paper. The band consisted of five musicians, Benny Carolan, John Sheridan, Michael Daly, Henry Thistle and Harry Thistle. They played mandolin, French fiddle, and fiddles. The dance was a great success and raised enough money to fit out the camogie team. The team colours were blue (skirts) and white (blouses). The team practiced on the lawn at Quilca with Johnny Carolan in charge. Lucille Tackney was secretary with Nora Quinn as treasurer. Ardlow played Lurgan, Maghera and Virginia. The teams travelled by bicycle. Usually the game was followed by tea and the evening was rounded off by a ceilidhe.

Camogie in the country owes a dept to Rev. Dr Martin Comey for his interest and encouragement while a curate in Cavan. He brought his enthusiasm for the game with him to Virginia, where he was appointed PP in 1930. When the first convention was held in Cavan on May 25th, 1932, four of six clubs represented were from the immediate vicinity of Virginia, Ardlow, Maghera, Munterconnaught and Virginia. Names of members associated with the early 1930’s team were as follows, Rosie Gillick, Nora Gillick, Aggie Maguire, Maggie Carolan, Eileen Lynch, Dily Lynch, Delia Farrelly, Betty Farrelly, Kathleen Traynor, Marion Logan, Kathleen Farrelly, Lily Gibson, Susie Gibson, Laura Cooney, Dymphna Clarke, Mary Connell, Mary Carolan, and Lucille Tackney.

In the early’ thirties enthusiasm was such that there were teams in Corlatt who practiced in Peter Daly’s field, in Cornakill who practiced in Sheridan’s field, and this was usually followed by a dance in Paddy Gaynor’s house, and in Cross who continued to practice on the lawn and inevitably went down to Tom and Kate Farrelly’s, Drumrath for refreshments, again followed by a ceilidhe. Camogie records give a team in Mullagh in 1934, 1937 and 1938. This team was an amalgamation of Corlatt, Mullagh, Cross and Maghera. In 1938 they played a final against Bellany, near Oldcastle. This team was coached by Mark Clinton and Jimmy Brogan of the football club. Ralph McKenna and Matt Gilesnan looked after transport. A list of those involved in this team reads as follows, Mollie Clinton, Lucy Brady, Cissie McGrath, Babie Muldoon, Julia Muldoon, Delia Farrelly, Mary Farrelly, Helen Farrelly, Betty Farrelly, Rosie O’Brien, Maggie Carolan, Anne Carolan, Babs Cahill, Bridie O’Brien, Jenny Farrelly, Baby Smith, Maggie Daly, Betty Daly and Rita Farrelly. It is interesting to note in this particular period the Parish of Mullagh was one of a small number of areas in he county to keep the camogie flag flying. It would appear that then as now the big problem was finance. In 1940 only 5 clubs existed in the county.

Not surprisingly the game declined in the War years, but in the late forties and into the fifties there was a strong camogie club in the parish. The standard of the game must have been good as four members of the club, Rita Farrelly, Rita Cahillane, Babs Cahill and Meta McCabe played with the county team. All of those who were part of this team are at present alive and well, Rita Farrelly, Kathleen O’Brien, Mary Farrelly, Kathleen Farrelly, Rita Cahillane NT, Catherine Farrelly, Meta McCabe, Maureen Keating, Rosaleen Farrelly, Bridget Sheridan, Kathleen Conway, Babs Cahill, Mary Brady, Mary Fitzsimons, Annie Flanagan, Kathleen Brady, Eithne McCabe, Una McCabe, Anna Farrelly, Rose Farrelly and Rosie Cullen.

Lack of success in terms of trophies or championships won did not deter the girls of Cross area from playing the game and they carried the flag into the’ sixties. All the time the standard was rising and in this decade there were some excellent exponents of the game, who did not get much chance to exhibit their talents as the game in the county was in a state of decline once more. For example, a league which commenced in April 1967 was not completed until May the following year. The players who kept the game going in Cross were Carmel Daly, Sheila Lynch, Mary B. Daly, Goretti Daly, Eithne Carolan, Rosie Farrelly, Helen Farrelly, Breda O’Reilly, Maura McCabe, Nora Smith, Mary Clarke, Monica Carolan, Anne Farrelly(RIP), Lizzie Farrelly, Annette Taite, Aileen Logan, Kathleen Quigley. As has already been mentioned, these teams never made national news, but they fulfilled a very important role in the parish. They carried on the ideals of the GAA among the girls of the area, provided healthy exercise and entertainment, and laid the foundation on which the victories of the seventies were built.

CAMOGIE IN THE SEVENTIES.

Camogie made great strides in the county in the 1970’s, under the dynamic leadership of Fr. Oliver O’Reilly, and these years were also, without question, the greatest period for camogie in Mullagh parish. A team, based on the Virginia Vocational School team which included many players from Mullagh parish, was formed and was registered as Craobh Rua. In 1972, this team won the Cavan Senior League. Later, the team split up to establish two separate clubs, Cuchulainns and Craobh Rua. Both these clubs were successful in subsequent years and despite opposing each other at times on the playing field, the spirit of comradeship between them remained.

A primary schools’ camogie team to represent the parish had been organised from 1971 on, by Mrs Rita Farrelly and Mrs Madeleine Mellett, and this aided the establishment of a parish-based team.

In 1975, Cuchulainns Camogie Club at last tasted victory when first of all they combined with Craobh Rua to win the Senior Championship on August 23rdagainst a Ballymachugh /Crosskeys combination with the score 5-4 to 2-1. The Anglo Celt report of the game: – "the real victor was the game of camogie. The spectators were treated to a game of brilliant moves from both sides, good passing and neat strokes adding flavour to what turned out to be a great sporting occasion". The winning team included the following from our parish, Elizabeth Daly, Rosemary Traynor, Noreen Lynch, Kathleen Lynch, Marion Smyth, Margaret Smith and Nuala Farrelly, the heroine of the final with two goals. A fortnight later the Cuchulainns team were back in Breifne Park against Crosskeys in the junior final. The astute management of Mrs Rita Farrelly and the opportunism of Helen Clarke helped Cuchulainns win a thrilling game. The Cuchulainns’ team which brought the first championship to the parish was, Elizabeth Daly, Rosemary Traynor, Catherine Allen, Kathleen Daly, Noreen Lynch, Marion Smyth, Kathleen Lynch, Bridget Quinn, Helen Clarke, Margaret Smith, Nuala Farrelly, and Noreen Farrelly. Subs were Susan Daly, Sheila Reilly and Noreen Allen. The excitement was tremendous as the captain Kathleen Lynch was chaired off the pitch with the trophy and the celebrations continued with a bonfire which greeted the team in Mullagh on their return home. Later in the same year (1975) the Craobh Rua / Cuchulainns team representing the county, got to the Ulster club semi-final where they were beaten by a very strong Newry team. 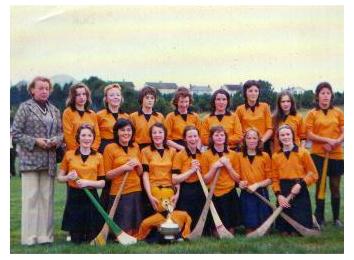 Having won the junior championship in the previous year Cuchulainns were promoted to intermediate status in 1976. After a not to brilliant league campaign which was won by Knockbride, Cuchulainns set out on the championship trail again, under the guidance of Joe Flannery, an Offaly man working in Wellman International. Again they reached the final and were met by a young Coothill side who had won the novice league in 1975 and the junior league in 1976. It was anybody’s game until the last ten minutes but although there were some new faces on the Cuchulainns side their greater experience told in the end and they overpowered the opposition with three goals to win by 7-3 to 4-0. Additional players to the 1975 panel were Valerie Carroll, Rosemary Farrelly and Breda Lynch. 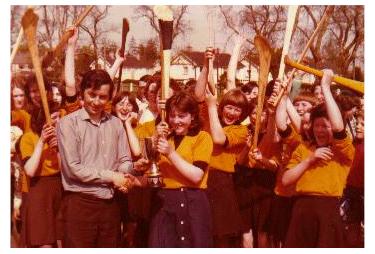 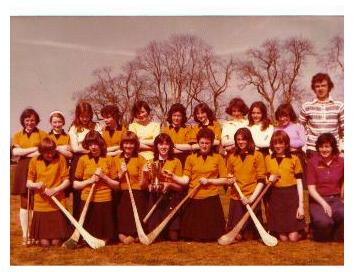 In 1978 Cuchulainns were back up to junior ranks with the novices of the previous year being managed by Kathleen Daly and Catherine Allen. Once again they battled their way to the final and had great support when they took the field in Ballyjamesduff on May 20th against Denn. The biggest worry for Cuchulainns was the fact that Rosemary Farrelly was injured and forced to play in goals, but this proved to be a blessing in disguise as she was the star of the team with many great saves, as Cuchulainns won yet another title by 3-2 to 2-1. In addition to the 1977 team, the panel included Carmel Daly and Breege Lynch with the return of Kathleen Lynch and Noreen Lynch.

This was the last title to come to the parish to date, even though the club carried on managed in 1979 by Margaret Smith and Anna May Daly and in 1980 by Christine Smyth. After this the side dispersed and the club went into abeyance until 1984 when it was revived with Mrs. Kay Monaghan in the chair. The club fielded intermediate and Junior B teams and a primary school team contested a final in 1986.

Among the latter day players to achieve distinction at county level were Christine Smyth and Frances Cahill. The have All-Ireland runner-up medals. Kay Smyth also gained her place on both minor and junior county panels, but of all the players who have donned the Cuchulainns jersey, one stands out above the rest. The name of this player is Kathleen Lynch whose skill, determination and dedication are an example to all players who had the pleasure of playing with or against her.