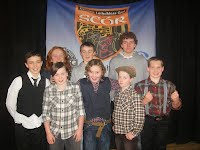 Since 1970, Scór.  competitions have been part of the GAA’s yearly programme from the end of November when the playing fields go idle, on to the end of April.  During these months the sounds of music, song and dance can be heard echoing from the little country halls and community centres where people prepare for the events, and the competitions take place.

In 2009 the participation of the club was revitilised in Scor when two groups from the club were entered into competition. The groups were a question time group and a ballad group under the leadership of Breda McMahon.

However over the years the Cuchulainn club has had many notable successes in Scór including five All-Ireland titles, two in Scór na nÓg and three in Scor Sinsir and four other Ulster titles and All-Ireland appearances.  The Club has won numerous county titles in set dancing, ballad group, question time, novelty act, solo singing and recitation.

The first appearance in an All-Ireland was with a Ballad Group in 1975.  The members were Cormac Cahill, Brian Cahill, Maura Mahon, Caitriona Ryan, and Deirdre Barry.  In 1979 Aileen Cahill represented the Club in the All-Ireland Recitation Competition. 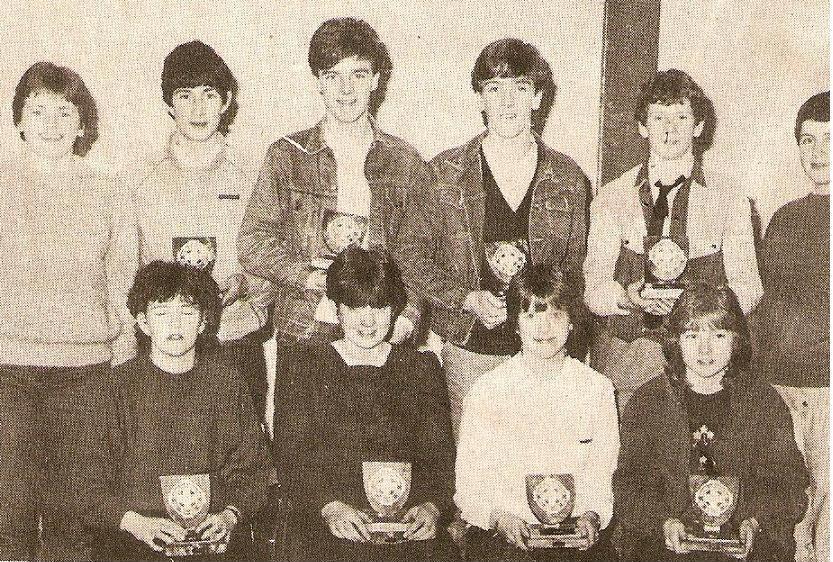 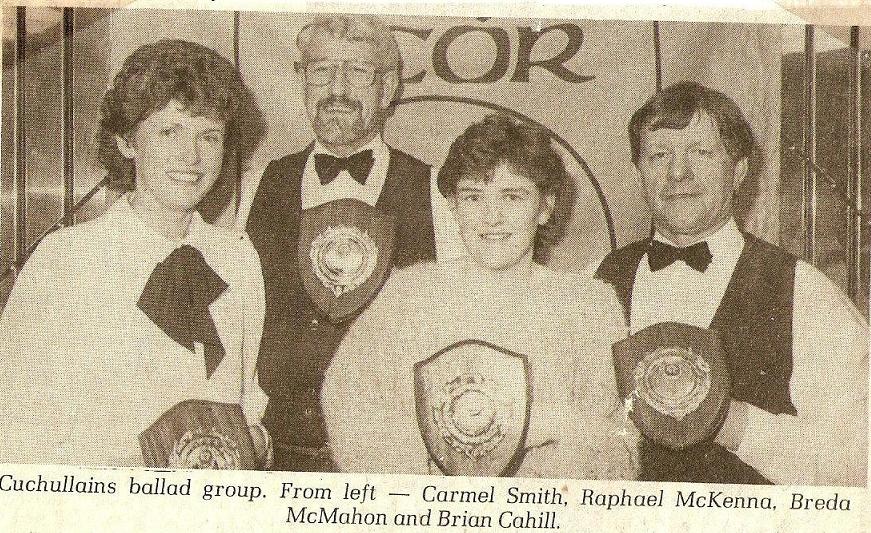 The Senior Ballad Group captured the next All Ireland title in 1986 when Breda McMahon, Carmel Smyth, Raphael McKenna and Brian Cahill became the first to bring a senior All Ireland Scor title to Cavan. This talented group went on to repeat their success when they again took the, county, Ulster and All Ireland crowns in 1989. In 1986 Eimear Ni Mhealoid represented the Club in the Scor na nOg All-Ireland in Galway in the recitation competition. 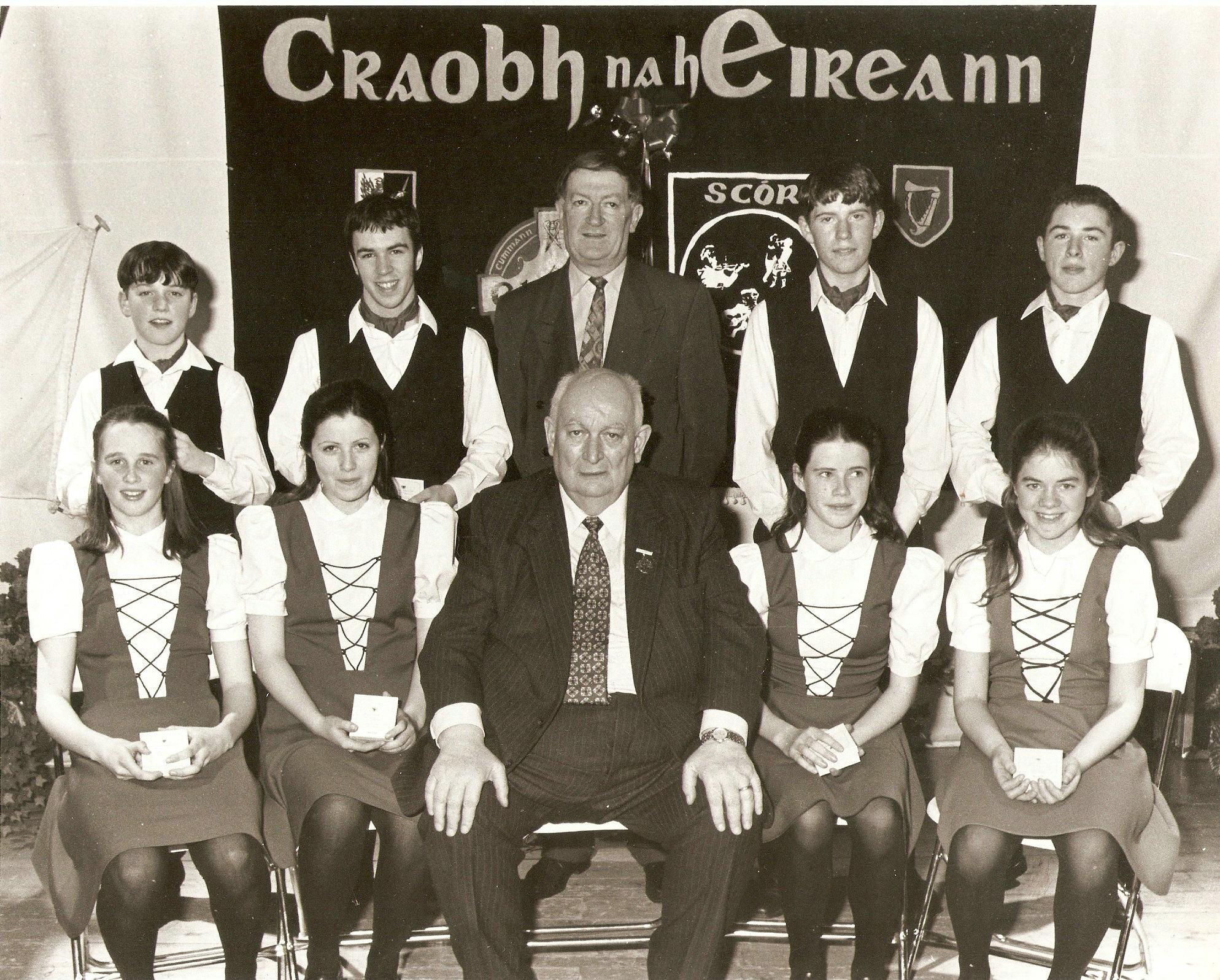 In 1997 the young set dancers kept up the tradition of set dancing in the area when they won the U-17 All-Ireland Title in Athlone. The stiffest competition was provided by Cappamore, Co. Limerick, Elphin Co. Roscommon, and the Down’s Co. Westmeath. The team lined out as follows: Donal and Gavin Daly. Patrick and Bernadine Murtagh., Martin Lynch, Cora McCabe, Jennifer Smith, Eimear Foxe and tutor Judith McQuade. 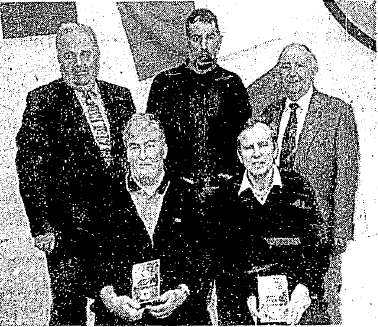 In 2000 on Saturday the  29th April, the Cuchulainn team of Joe Mellett (Front-left), Leslie Fox (Front-right) and Peadar McCabe (Centre-back) became All Ireland Scór champions in Question Time, when they won a dramatic final in the Ulster Hall, Belfast. A large number of Cavan followers attended the finals, which were being held in the Belfast venue for the second year in a row. Towards the latter stages of the quiz, Cuchulainns were trailing by six marks,but the Cavan representatives staged a great recovery in the final rounds of six-mark team questions, coming from behind, to draw level with Cratloe, Co. Clare (the 1998 All Ireland champions). Amid great tension in the hall, a tie-break playoff was then held to decide the winner. Cuchulainns won this playoff and so became All Ireland champions for 2000, amid scenes of great Breffni jubilation.