Update on the use of mouth-guards 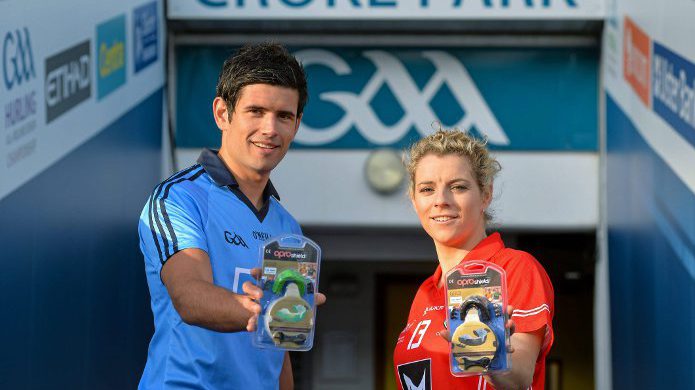 OPRO, the official GAA/GPA mouth-guard supplier, along with Cian O’Sullivan, Dublin and Valerie Mulcahy, Cork joined forces on Tuesday to raise awareness of the pending deadline for the compulsory use of mouth-guards for GAA footballers at all grades and ages.

Today’s event has been organised to reaffirm the message that as of January 1, a mouth-guard will be a basic part of player’s equipment just like boots or a jersey.
Liam Ó Néill

As of January 1, 2014, all GAA players must be equipped with mouth-guards when playing as part of the GAA’s ongoing efforts to safeguard the welfare of players.

Participation in GAA games will be dependent on players wearing a mouth-guard and match officials have been instructed accordingly. This latest move follows the introduction of the compulsory use of mouth-guards for all underage GAA players, which came into effect 12 months ago.

OPRO, in association with the GAA and GPA, have designed a full range of mouth-guards for GAA players, which are available at outlets nationwide.

Uachtarán Chumann Lúthchleas Gael Liam Ó Néill said: “Today’s event has been organised to reaffirm the message that as of January 1 a mouth-guard will be a basic part of player’s equipment just like boots or a jersey.

“This move, which follows the rulings surrounding the use of helmets and mouth-guards for juveniles, is a further indication of our commitment to ensuring the safest possible playing environment for our players and I would like to acknowledge our Medical, Scientific and Welfare Committee and our partners in this initiative OPRO.”

LGFA President, Pat Quill said ‘From January 1 all underage Ladies Gaelic Football players must wear mouth-guards. The aim of the new rule is to ensure that our players are protected as well as is possible to avoid any unnecessary injuries.’

GPA Chief Executive Dessie Farrell added: “The provision of custom fitted mouth guards to county footballers was one of the first services delivered to players under the GPA Health and Wellbeing Programme and we now welcome the next step in making the wearing of guards compulsory. This brings Gaelic football into line with best practice in other codes and is of fundamental importance to player welfare.”

Anthony Lovett, OPRO Director, stated that they are delighted to be working alongside the GAA and GPA in this very worthwhile initiative. “Over the years we have both seen and heard of some dreadful injuries sustained by players that could have been prevented had a well-fitting mouth-guard been worn. Unlike bones, broken teeth do not heal which makes their protection by a mouth-guard during any contact sport vital.”